COP26 is on the horizon and the world will be watching Glasgow as discussions take place that could shape our collective future. Understanding the relationship between scientific research and real world policy could not be more crucial in this space – so we decided to see what Overton’s data could tell us about the dynamics of climate change policymaking.

We searched for all policy documents with the topic “climate change” (as classified by our AI) and built a Report within the Overton platform to understand the characteristics of these documents (see below for more methodological notes).

We found 51,789 policy documents, from 143 countries and 1014 policy sources – this is the cohort we looked at for this analysis.

Are more policy documents on climate change being published each year?

We looked at the number of climate change-related policy documents published each year since 2015. Between 2015 and 2018 the number of publications stayed around 4000 per year, then it jumped up by a third in 2019 to 6114. The Covid effect seems to have dampened publication activity during 2020 but 2021 has already seen a huge increase on previous years’ output.

2021's climate change policy documents have been published by a wide range of sources but some significant drivers are the EU, UN and Food & Agriculture Organization, the World Bank, the Irish, UK and Dutch governments, Congressional hearings in the US and Parliament select committees and research briefings in the UK, each of which published at least 100 more documents relating to climate change than they did in 2020.

Which institutions are most cited in climate change policy documents? 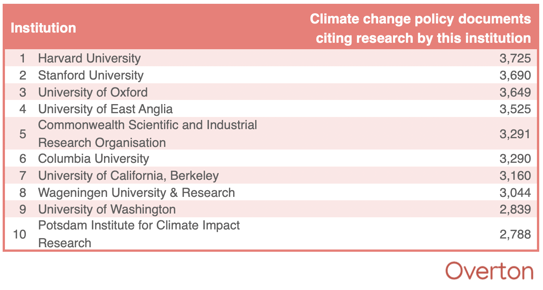 
Which countries produce the most climate change policy documents? 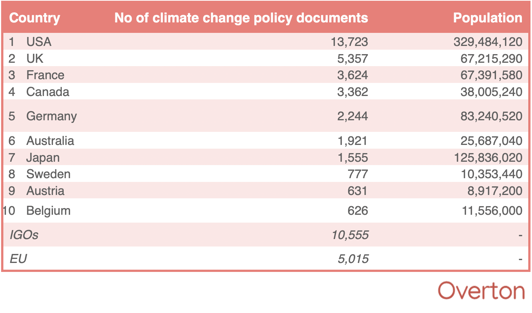 Of course, publishing policy documents does not equate to action on climate change – it’s entirely possible that some countries talk a lot about climate change but don’t actually follow through with actions. However, it is probably a relatively good indicator of the level of public and governmental awareness of the issues within a given country, which could be a precursor for public pressure and future action.

We also looked at population size alongside the number of policy documents, in order to calculate the policy output per 10,000 people*. When looking at the data in this way, we found that several countries with small populations punch above their weight in terms of the policy document output on climate change. Pacific and Indian Ocean island states Palau, Kiribati, Micronesia and the Maldives, as well as New Zealand and Ireland, appeared in the top 10 countries by output per capita. Canada, the UK, Australia and Sweden – which have larger populations – also appear in the top 10 in terms of output per capita.

This top level analysis was conducted using the tools within Overton's platforms. However, some clients prefer to use our API or export functions to extract the raw data to run more complex analyses and link it with their own datasets.

If you have any ideas for future areas we could investigate in a data story, or if you'd like to have a look at the data yourself, get in touch!